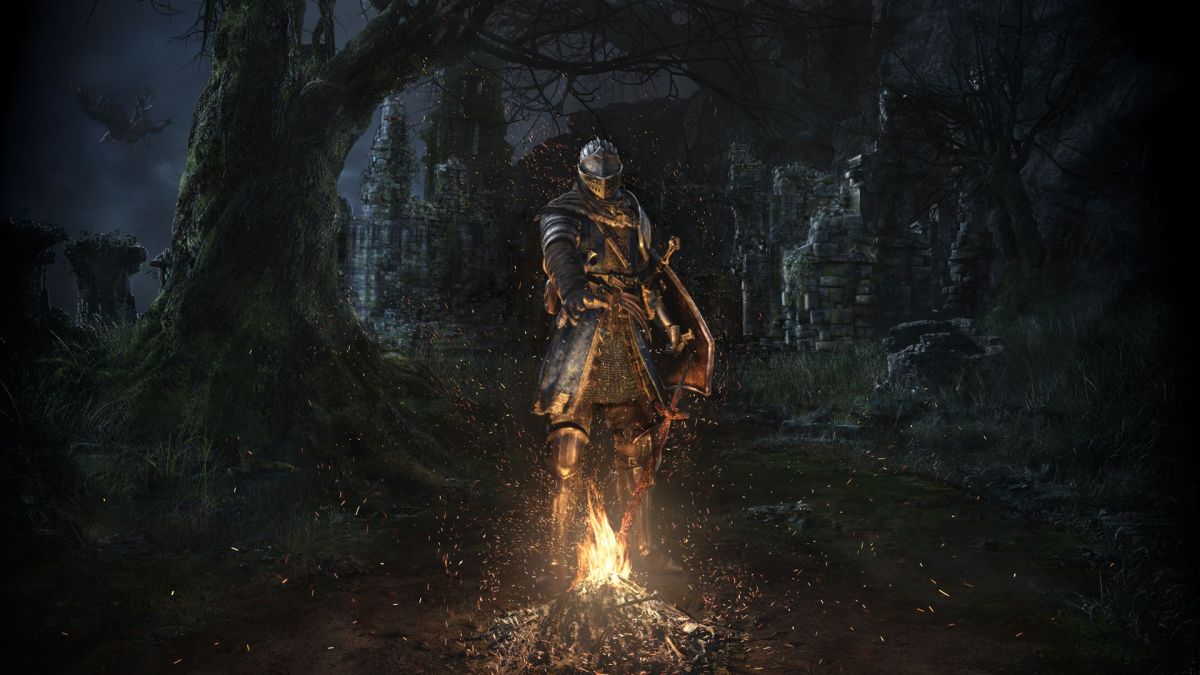 Dark Souls was originally released in 2012 to widespread critical acclaim. The spiritual successor to the lesser renowned Demon’s Souls, it carried through many motifs and ideas that Hidetaka Miyazaki and From Software had initially established. Now nearly 7 years after its original release it is one of the high points of gaming both as entertainment and art.

With widespread discussion of its lore (including an excellent series by VaatiVidya) and with a plethora of games that have followed in its footsteps in terms of mechanics and design, it has become one of the games that many others are held to in terms of standards.
To approach a game that has established so widespread a legacy in so short a time is somewhat daunting but not quite as daunting as approaching the unassuming white mist that bars the way to a boss fight.

Dark Souls has a Promethean premise. From its mythical opening moments, that clearly draw inspiration from the Greek myth to a more expansive view that incorporates the Arthurian romances and Christian motifs of the holy grail and sacrifice; the setting, ambience and ambiguous lore is deftly established. The root material and philosophical premise that looks at an understanding of existence and the torment it inflicts on those who are alive expand upon the western literary tradition it draws inspiration from, but juxtaposes this with a more postmodern nihilistic worldview, that challenges and subverts notions of redemption, sacrifice, chivalry and restitution.

Anor Londo and Lordran as places are equivalent to a mythical Camelot or Olympus. Set high upon a mountaintop, inaccessible by ordinary means, the passageway is only opened by the tolling of bells (that ring for birth and death). Once one reaches the heavenly city (heavenly since it exists in the sky) one finds that the gods have already fallen, and existence is tenuously preserved by the rekindling of a flame that symbolizes the age of fire. It’s only by sacrificing the Lords to a lordvessel (similar to the Holy Grail, or Black Cauldron of Cernunnos from which the dead arise) that the age might be preserved. The entirety of civilization and order is dependent on this sacrifice. As the ‘Chosen Undead’ it is your duty to either fulfil the sacred duty of preservation or allow the world to fall into a ‘dark age’.

The ramifications of this are further explored in the concept of Souls. Souls are not only individuals, but also function as currency, by defeating and acquiring the essences of people who have been divested of their own will (those who have fallen into despair). Humanity is considered separately, and it’s in humanity that one is able to realise both the best and worst of what makes the concept of human (to invade or to assist). These metaphysical elements underscore the overall narrative and create a comparison to the darkly physical yet still alluringly beautiful world.

As an RPG with action mechanics Dark Souls is viscerally satisfying. Combat is slow and heavy, even with dexterity builds you will find yourself delaying attacks to seek for the perfect opening. Played out in a 3rd person perspective, navigating and using the environment to the best advantage whilst cautiously enticing enemies into overplaying their hand before you parry, riposte or outmaneuver them for a backstab. Playing strategically is of the utmost benefit in Dark Souls, and will demand your attention; carelessness will quickly result in death.

Characters advance by collecting souls and using those to pay for attribute points. As your ‘soul level’ increases the cost to increase the attributes does so as well in a carefully scaled system. The max attribute benefit is around 45, after which the scaling levels off. As such its best to focus on the starting attributes of your class which are the standard RPG fare, with warriors, clerics, sorcerers and pyromancers (fire of course holding especial significance). Each class is viable (I usually play casters so I have both a pyro and a sorcerer, and a low level warrior) and will require different approaches to areas and enemies. I quickly found my sorcerer excelled at picking off enemies from afar, which meant I could find a good spot and launch volleys of soul arrows, the pyromancer was better at mid-range, with a combined strategy of running in and out and leading the enemy around, whereas the warrior was close range, and much more reliant on dodging and parrying.

In addition to your stats, your equipment is of vital importance. Weapons (and the right choice of weapon) are serious decisions. Various weapons scale with different attributes, e.g. the estoc will scale with intelligence whereas the great axe scales with strength, that mean you will likely choose a weapon that best fits your class. In addition weapons have different move sets, a halberd has a jabbing attack as well as a sweeping attack and great reach whereas a long sword has slashing attacks in different directions and good ability to stagger an opponent. Knowing your weapons attributes and move sets is equally vital to survival. A well leveled weapon can easily determine the difficulty or ease of an encounter.

Other equipment is more situational. Rings provide various benefits such as increased item find as well as increasing your weight limit or making sure you don’t lose your souls and humanity if you do die. I found myself switching armour dependant on needs. Armour also has weight and mobility is dependent on this. Heavy armour will make you dodge more slowly however gives you more poise making you less prone to staggering, whereas lightweight armours will keep you mobile and able to dodge swiftly.

Most enemy encounters take place in a variety of areas, from precarious cliffside paths that will send you plummeting to your doom or expansive hallways and forests. There are a range of locations to explore with unique enemies in each area. As hostile as the environments can be, from poison water to trees and branches impeding your escape, the enemies themselves are the most lethal.
Each enemy has a specific move set and will provide you with tells for their attacks. Working out ways to approach encounters, as well as having a strategy to effectively take down each enemy type is integral to the game. Some enemies may require you to stay at range dashing in for quick attacks whereas other enemies it’s best to stay nearly underfoot, causing them to twist around to attempt to hit you. The enemies are often placed in strategic locations so using the environment to your best advantage is necessary, otherwise you may just find yourself impaled.

As much as the exploration is a driving force behind the game, the other major aspect is the boss fights. Each boss is distinct, from the calm encounter with the moonlight butterfly to the intensity of the final boss, each one will offer a new challenge and new move set to learn. Observing the bosses’ tells is key to avoiding their attacks, allowing you seconds in order to counter or escape. Combat becomes a dialogue, listening to the boss before responding.
In addition you can use summons (NPC or PC) to assist with the bosses however in some instances additional party members can increase the difficulty of the boss, so whether you want a greater challenge or are looking to make it easier, is situational.

Multiplayer aspects are still available, however the player population is fairly low averaging out at 500-1000 players daily with slightly higher numbers in the remastered edition (source:Steamdb). My own observations hovered around the 400 concurrent player mark. It’s possible to find matches and duels but is not always consistent. On the plus side if you’re a PvE player you’ll have less worries about invasions and being ganked. PvP enthusiasts however will be disappointed.

The graphics are beginning to show their age even when using the dsfix mod. There was some camera clipping and I did see a frame rate drop in Sen’s Fortress (the game also crashed a few times there), but for the most part the game is holding up well. Textures are all still viable and the game worked well in HD widescreen, with no tearing or stretching.
The ambience evoked by the design is superb. Each area is distinct, and whilst they all add thematically to the tone of the game, they also contribute to the mythical elements. From forests and woods, to the soaring parapets and gothic cathedrals the elements combine to clearly showcase the inspirations.
Enemies such as Hollows or beasts are deftly animated, and whilst some are generic others are truly fantastical in their design. In particular the later game enemies that have much of the grotesque about them, that show the decay and corruption that has befallen the world.

The soundtrack is beautifully executed with an orchestral soundtrack that accompanies various moments in the game as well as faster tempo and grander tones during boss battles, with each boss having their own motif.
The environmental sounds are where the game is at it’s greatest, from the chink of armour as your move about to the clash of weapons increasing during a crescendo of attacks, the audio makes the battles and struggle to survive come to life. In addition audio can assists with hinting at enemies locations. Pausing for moments at a blind corner, you might hear the tap of armoured feet, or scuffling of a beasts claws. Running from enemies you can trace the sound of their approach. I played with stereo headphones rather than a surround system and it really was a phenomenal experience.

As much as Dark Souls is a game of skill, there is some leeway within the RPG elements to surpass areas by grinding yourself to a higher level. With some luck and above all persistence Dark Souls will slowly reveal its world. Observation and attention to detail is integral and will allow for greater interpretation of its obscure and ambiguous lore. At its heart Dark Souls doesn’t just explore how the decline of a civilization occurs, it also looks to human intrepidity and exploration as means of salvation.

Dark Souls is no longer available in the standard edition

The banner image is copyright of From Software Inc. and used under a Fair Use Policy.