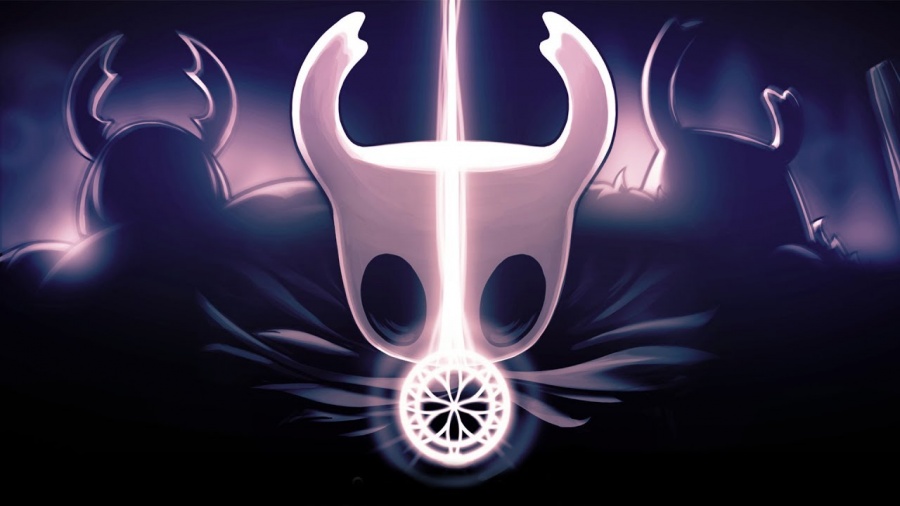 Hollow Knight is a game with a lauded reputation that precedes it, including being brutally difficult but also extremely rewarding. What was striking to me is that it does live up to this reputation in every way.

A mysterious bug emerges from the wilderness to discover an ancient village, decrepit and with one sole inhabitant, who points out a mysterious ruined city far below. Compelled by this mystery the small insect descends to discover the secrets beneath.

Rich in archetypal symbolism, from contrasting opposing forces, to vague references to dreams and a creeping infestation and plague that results in madness, Hollow Knight explores its themes of decay and decrepitude with you the player, the Knight gathering the last remnants of civilization even as you ultimately seal its own fate, in one of four possible endings.

The motifs that Hollow Knight uses are sometimes subverted and sometimes remain the same, even as the world descends into further chaos due to your actions (which have a real and visible affect on a certain area of the game), for instance light and illumination are here in the role of the Jungian shadow just as the darkness or void and chaos are revealed to as the substance of the Knight. In a world of ruin, anarchy becomes paramount and the swathes of destruction that you leave in your wake partially reveal you as an anti-hero just as much as the prophsized saviour. It’s a beautifully complex tale and the lore is often revealed through poetic stanzas; phrased and contextualized in prophetic forms. It’s also subtle, barely revealing the hints to the player until you’ve actually encountered it and realise what was being referred to. At times this vagueness can be frustrating, but it does lead to further impetus to explore, to figure out the mysteries that surround the environs in which you are in.

It’s this notion of exploration and discovery that drive many elements of the game. As such various motivators are used, from various collectibles, whether its slaughtering enemies to add to the bestiary or pursuing charms to gain additional advantages or unfolding the next segment of the story, there is much to explore. This is impeded by aforementioned enemies and the area designs themselves. As interconnected as they might be with multiple entrances- and two transport options- the game itself will actively limit your exploration with a variety of hazards. Backtracking after gaining a new ability becomes essential as new parts of old areas will become accessible. At times this can be immensely frustrating as you slowly wend your way back across the map praying for a bench to save your progress.

The controls to accomplish all this are fluid and responsive. I played with the keyboard that used the arrow keys to control movement and z, x, c, & d that controlled various abilities such as dash and attack. From this basic system emerges one that is far more complex. Jumping and swinging your sword in a down attack can result in a pogo like movement, combining dash with an attack can result in a new move, and the game slowly reveals its complexities. It’s intuitive and flows easily which is a direct counterpart to the games other mechanics.

Enemies come in a great variety, all with distinct move sets to be memorized and unique strategies to defeat. The environment itself becomes a tool, defeating a flying enemy may mean avoiding it by jumping up a wall then dashing off of it to slice your enemy from the air, or dodging incoming missiles by dashing behind part of the scenery so that it harmlessly hits the object instead. Enemies also at times explode, so even a triumph might inadvertently turn into a defeat. At times I found myself also luring enemies toward hazards such as water or acid, making them dash towards me, leaping overhead to watch them drown in the depths… although this did lessen my financial reward. Notably the game does reward a more cautious playstyle than an aggressive one and this may not sit well with some players.

The bosses are where the main struggle of the game also arises. Usually located fairly far from the benches you need to first get to them then attempt to defeat them. Soul, which is used to heal yourself may be used up just before you get to them, and so trying to harvest from the enemies on the way creating a balancing act between acquiring soul from hits and using it to heal damage becomes a delicate economical affair. The bosses themselves have the familiar stages of attack patterns to them as well as unique attacks to each one. Some bosses can be faced multiple times with the second iteration a far harder battle yet offering a greater reward.

Currency takes the form of geo, which can be used to purchase additional charms or map markers. It also acts as a toll fee to open up transport options and at times even benches which serve as rejuvenation and save points. Early game I struggled immensely with geo, it was in short supply and even affording a map (which are essential!) was often a struggle. However my mid to late game it was in more plentiful supply.

The charms become essential mid-game and finding unique interactions and boosts around them will aid in various play styles. You can boost soul intake for more healing or spell casting, or boost up your nail (sword) arts for more damaging attacks. Finding a set that suits your needs adds a slight rpg like feel to a game that doesn’t really have true rpg mechanics. In fact I began to find mid and late game to be far easier as I boosted myself with the charms and new earned abilities.

With it’s low system requirements Hollow Knight still manages to appear incredible. This largely lies in the creative art design and small attention to details. The colour palette is sombre and subdued, yet the ornate and intricate fore and backgrounds great a gothic aesthetic that is hard to compare to. It simultaneously creates the sense of decay, a mood of despair whilst still portraying the decadence of the once great kingdom. Here are all the same hallmarks of art style that games like ‘Castlevania’ and ‘Dark Souls’ also used to great effect.

The animations are fluid and each enemy can be clearly seen to have unique aspects so essential to knowing which attack they’ll use and so how to avoid it. This combined with the creativity of the designs makes for a game that is constantly providing feedback to the player about how to react in order to survive.

The soundtrack is gorgeous, and use of leitmotifs will occur at intervals to hint at new events as well as (obviously) each boss having their own unique track further increasing the intensity of the fight. The calmness and tranquility of a few of the ordinary environmental tracks help calm you even as the frustration and high intense concentration required from the gameplay increase stress. So this counterpoint was one I was rather grateful for!

Hollow Knight certainly lived up to the high acclaim it has received. I was immensely surprised by it, and despite the initial difficulty curve I found myself absorbed by its world, environments, gameplay and lore as they unfolded. The exploration struck a wonderful balance between the extrinsic motivation (I want that new charm) to the intrinisic (will I be skilled enough to overcome this gauntlet of traps?) It’s truly a wonderful experience and whilst it is hard, it is rewarding, immensely so!

The banner image is copyright of Team Cherry and used under a Fair Usage Policy.